In Honour of Sinikka

You are here: Home1 / Icewisdom Blog2 / General3 / In Honour of Sinikka 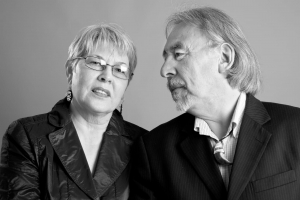 It is with Heavy Heart and Sadness – but with Joy – me and our old son Mikaalli-Mike we announce to you the passing of our beloved Mother and Nuliak-Wife Sinikka.

After about 12 years battle against the Alzheimer’s disease – our beloved Sinikka succumbed October 7th at 03:28 in Forest Valley Alzheimer’s Home.

Our beloved Sinikka was born on 02 June 1946 and declared as a Bahai upon turning 18 and served the Faith in Oshawa Port Hope in Ontario and as a Pioneer in Iceland and Iqaluit and Nuuk in Greenland. She traveled to the Holy Land 7 times and was in Haifa as a member of the National Spiritual Assembly of Greenland to be part of Electing members of Universal House of Justice.

I have been incredibly privileged having been accepted by this amazing Sinikka which in her language of Finnish means ‘Blue Flower’. She stayed by my side from 16th October 1982 till 07th October 2021 – at the time of our wedding on 10th December 1982 I promised her that we will travel. With her blessings I traveled to 73 countries for work and she traveled to more than 40 countries in Caribbean Islands from Bermuda in the North to Grenada in the South, in most of the European Countries, in all the Scandinavian Countries including Murmansk, Hong Kong, Macau, Quandong, Taiwan and Japan, Mexico and Brazil and many of the States in United States of America and all the Provinces and Territories in Canada – as she would say – to cry out the name of Baha.

My beloved Sinikka left us here on this Earth to carry on in life – her sister Eva and her husband Cam and their son Luke and her brother Tim in Baha California and our old son Mikaalli-Mike.

On behalf of our Families in Canada, Mexico, Germany, Sweden, Finland and Greenland – I would like to invite anyone willing to our final Ceremony – what we in Greenlandic call ‘Sinikkannguup kingorlerpaamik Nunarsuattinni pisuttuarnera’ – ‘Our beloved Sinikka’s Last Earthly Walk from Capital Memorial Cemetery to Baha’i Gardens on Thursday 14th October at 13:00 hours or 1:00pm.

Afterwards we would like to invite everyone to a Greenlandic Kalaallit Tradition of Kaffimik at the home of Fariba and Louis – the address is 89 Summerwalk Place in Nepean.

If you wish to donate in Honour of Sinikka, please make your donation to this paypal account: Donation Sinikka