You are here: Home1 / IceWisdom2 / Elders

AAtsaarsuaq Hansiina is an Elder from Kalaalit Nunaat – Greenland. She was born in 1927 in to a family of Wisdom Keepers. ‘Atsaarsuaq’ is Greenlandic for great-aunt, and it is Hansiina’s desire to be great-aunt to the people of this world.

On July 17, 2009 Atsaarsuaq Hansiina led a group of women in gently cutting trees for the first time in thousands of years. Carrying the traditional woman’s knife they left the camp in silence. Joyfully they returned, bringing the wood back to the fire pit. Atsaarsuaq Hansiina poured burning oil from the traditinoal seal oil lamp over the wood, thereby igniting the Sacred Fire. Due to climate change trees are once again standing tall in Greenland. And so the Sacred Fire returned to the people at the top of the world – fulfilling an ancient prophecy.

In July 2019 Atsaarsuaq moved on to the next world.

Akkaaraq is a highly respected Elder and hunter from Greenland. He was born in 1931 in to a world that lived in unity with nature.

Akkaaraq grew up knowing the prophecy handed down orally for generations that: ‘One day, when the world needs it most the Sacred Fire will return to the people at the Top of the World.’ Akkaaraq never imagined that the prophecy would be fulfilled during his lifetime. In July 2009 he led the men in creating the base for the Sacred Fire with more than 200 bundles of ashes. These bundles had arrived in Greenland from Sacred Fires from all around the world.

In July 2010 Akkaaraq traveled with Atsaarsuaq Hansiina and Angaangaq to the land of the Big Trees, Amazonia. As ambassador from Greenland, the land of the Big Ice he brought the message of melting the ice in the heart of Man, a message from the land that has never known war. In 2016 Akkaaraq moved on to the next world.

Despite his young appearance, Nukartaa belongs to the Greenlandic Elders. As a young man, Nukartaa travelled the oceans and later in his life, he educated prospective sailors how to navigate. He is the official Elder of the “Tuukkaq Circle”.

Elisabeth Ningijoq is playing the Qilaut, the traditional Greenlandic drum.  In her drumming and dance she is deeply connected with her roots and ancestors.  Her path with the drum started in the Eighties.  She started to draw drums, then she painted them and created sculptures of drums. Finally she built her own drums and learned to play them and to do the drum dance. Now she is teaching drumdance to children and giving drumdance for visitors in Greenland.

In summer 2019 she became an Elder for the European “Tuukkaq Circle“. 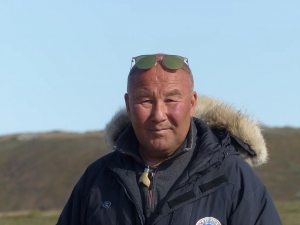 Adam is professional hiking guide in Greenland. Nobody else has visited the “Big Ice” near Kangerlussuaq more often than him. He carries deep knowledge about the plant and animal world, the Ice and the changes which are happening in Greenland since many years.  In summer 2017 he became an Elder for the European “Tuukkaq Circle“. 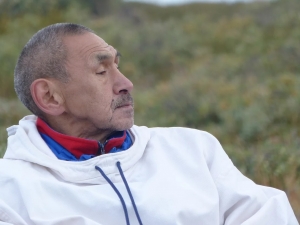 Mannarsi Sapiitsoq heard in 2009 about the  “Fire and Ice Ceremony” and walked 5 days from the coast to Kangerlussuaq to be part of it. Since that time he is supporting people in the summer camps at the sacred site. In summer 2019 he became an Elder for the European “Tuukkaq Circle“. In December 2020 he was recognized as an honorary citizen of Kangerlussuaq. 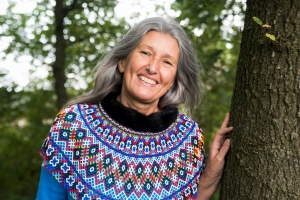 Ningijoq Saamasoq is coming from the Netherlands and walks with Angaangaq for many years. In Greenland she learned traditional drum-dancing and she got recognized as an Inuk (“a real human”) as she was told: “you are one of us”. In 2018 she became an Elder for the Sweetgrass Circle and in 2020 for Tuukkaq Circle and IceWisdom. She’s founder of the Native Greenland Foundation. Her name means “Peaceful Elder”. 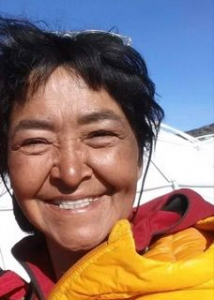 aria Steenholdt is an elder and translator of the English, Danish and Kalaallisut Inuit languages, translating several books for various writers and organizations. She is currently translating several documents, while co-creating newly forming Greenlandic Grandmothers Council for IceWisdom. With a team from IceWisdom and other Greenlandic elders, she is helping to give the Greenlandic people a voice regarding the current needs of her people.

She had been part of several elders gatherings, helping to transform vulnerability into healing stories.

aria Olsen is an elder who brings to us and shares her family’s personal experiences and challenges of being a Greenlandic. She brings truth and awareness regarding the needs of the Greenlandic people as her part of co-creating the newly forming Grandmother’s Council for IceWisdom.

She had been part of several elders gatherings, and gave evidence about an inner strength which is the ability to walk your path way beyond physical limitations.