You are here: Home1 / IceWisdom 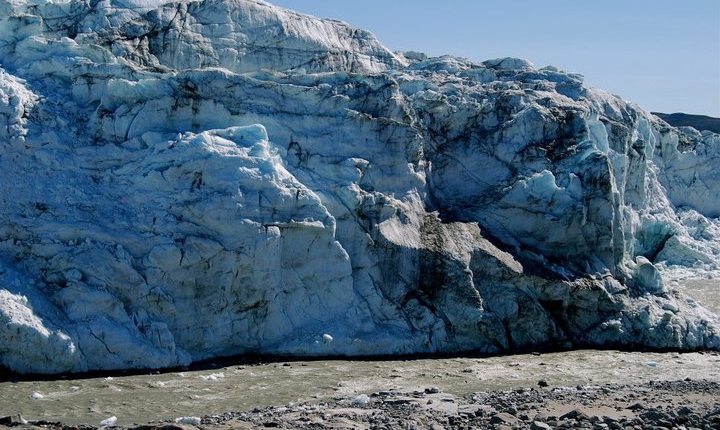 Icewisdom – The Ice is Speaking

In the deep of winter of 1963 two young Greenlandic men went hunting and came to the big wall and did their ceremony. As they did so, they noticed that water was coming out of the Big Ice way up the wall. When they returned and told the Elders of that strange phenomenon – no one believed them. How could water move, when the temperature has been less than minus 30 degrees Celsius (-22 ºF) for about three months. Later that winter other Elders went hunting and upon returning confirmed that water was trickling out of the Big Ice at the Big Wall. That became the first sign that something was amiss – not at home – but in the world.

Today that trickle has grown to roaring rivers of water pouring out of the Big Ice into the Atlantic Ocean. Since that first trickle was noticed the average depth of the Icecap has shrunk from five kilometers (three miles) to three kilometers (2 miles), and the melt is accelerating. Today there are hundreds of roaring rivers coming off the Icecap year round. In geological terms the rapidity of ice melt in Greenland is instantaneous.

The melting Icecap is the most dramatic evidence of accelerating global climate change. Greenland is the “Ground Zero” of Climate Change. The certainty is that our world is changing, and those changes will alter our way of life at best, and destroy them at worst. The melting of the Ice in Greenland is a call for us to reflect the spiritual significance of Climate change and our way of living.

Angaangaq is sharing the ancient wisdom of the tradition of the Far North in seminars and lectures.

Runing water at the Russel Galcier in the middle of the winter at -35°. The glaciers are so fast now, that they keep on melting in the winter time.

IceWisdom International is committed to bring back the wisdom of the Far North to people all over the world for creating healing and peace. That ancient wisdom enabled people over thousands of years to survive in one of the harshest places on Earth. We bring that wisdom back to modern life by creating Circles, through Intensives and through participation in international symposia and environmental preservation and educational programs.
We are not governed by, aligned with or licensed under any religious or political institution or with any country or multi-national organization.

The ice cap far north in the Arctic is melting at an alarming rate threatening the world with consequences we can barely imagine. We’re faced with the moral responsibility to direct ourselves toward a more positive spiritual and planetary evolution.
It’s time to look with eyes of faith into our future and believe we can make a difference. If we have hope, there is potential for extraordinary change – things will survive. The Elders teach us if we return to harmony in our lives, melting the ice in our hearts, reconnecting with one another, we will survive. It is time to use this knowledge to help mankind.